UPDATE AT MAY 2022:   It is planned that the Jetty will be rebuilt as part of an $18 million package for piers and jetties across Victoria. Construction of the new jetty will be subject to securing the necessary environmental approvals, which are required to deliver this project due to proximity to Nooramunga Marine and Coastal Park and the adjoining Ramsar wetland. It’s expected to take up to 12 months to secure the necessary approvals before work on site can begin.

The McLoughlins Beach Jetty is owned by the Victorian Government and managed by Gippsland Ports. Last rebuilt in 1985, the jetty is now very close to the end of its useful life.

Demolition and replacement of the jetty will be required in the near future. A new jetty on the same scale, and of similar construction, is estimated, subject to final design, to cost approximately $1.5M.

Since 2002, Gippsland Ports has submitted several grant applications for funding to rebuild the jetty, without success.

Due to the extremely low level of boating usage, the project does not fully meet the criteria of the Victorian Government’s Boating Safety and Facilities Program, and Gippsland Ports is not eligible for funding under the current Recreational Fishing and Camping Facilities Program.

Without external grant funding, Gippsland Ports does not have the financial resources to rebuild the jetty.

Recognising the high value that the community places on the jetty, Gippsland Ports has continued to undertake maintenance and repair of the jetty to keep the facility in a safe and useable condition.

The jetty structure is now in very poor condition with the deck deteriorating quite rapidly, such that within 12 months, it may be unsafe, constituting a risk to users, potentially necessitating closure of the jetty at short notice.

Gippsland Ports is committed to ensuring that the jetty remains open for public access for as long as possible and is now carrying out increased inspections and is continuing ongoing maintenance whilst it is cost effective to do so. 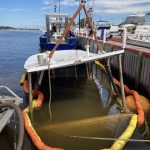 Time to check your boat?