The rehabilitated Port Welshpool Long Jetty has been opened for public access since 21 December 2018 and will remain open while minor works including the installation of interpretive signage are completed. An official public opening and community celebration is anticipated for some time early in 2019.

The unofficial opening in December 2018 was initiated to ensure the jetty would be enjoyed by the public over the summer period.

The Port Welshpool Long Jetty was constructed in the late 1930’s, extended in the 1980’s, and was closed following fire damage in 2003. Over time the condition of the jetty structure continued to deteriorate with no clear direction or commitment to the future of the structure.

In 2017, funding for a rehabilitation project to provide pedestrian access and access for emergency and maintenance vehicles was secured through grants from Regional Development Victoria, Federal Department of Infrastructure and Regional Development and South Gippsland Shire Council.

A Project Control Group (PCG) was established to oversee the project to completion; Gippsland Ports was responsible for project delivery and contract management and South Gippsland Shire Council responsible for all media, messaging and community engagement.

Following a tender process the contract for the rehabilitation of the Port Welshpool Long Jetty was awarded to SMC Marine Pty Ltd.  SMC Marine is a Sydney based company with extensive experience in the rehabilitation of timber wharfs and piers both in and around Sydney and in Western Australia; recently they have designed and constructed the Anderson Road Jetty at Cowes and the Myer Street Jetty at Lakes Entrance. SMC Marine engaged the services of local and regional subcontractors and suppliers throughout the project.

Works commenced on site in July 2017 with site establishment and the removal of the deck timbers from the inshore section.

The existing piles have been rehabilitated as much as is practical and from pile row 62 to the start of the burnt section (pile row 250), a distance of approximately 572 metres, the existing structure was demolished and replaced to follow the original alignment, with the new structure comprising timber piles and crossheads with a composite steel beam and concrete deck.  The new timber piles are turpentine species driven at a rake to match the existing piles at six metre centres compared to the three metre centre of the piles in the existing jetty.

The outer end of the jetty, beyond the end of the reconstructed jetty, has been demolished with the piles being cut off at 2 metres below low water to be retained as habitat and navigation aids installed to define the underwater habitat area.

The finished jetty has been built to the requirements for disabled access and fitted with a handrail on sides, public lighting, a water supply and fire service; the jetty also features fishing stations, artefacts and interpretive signage.

Visit the South Gippsland Shire website for news and updates as they become available. http://www.southgippsland.vic.gov.au/homepage/176/long_jetty_rehabilitation_project 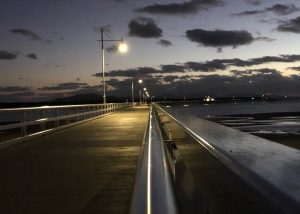 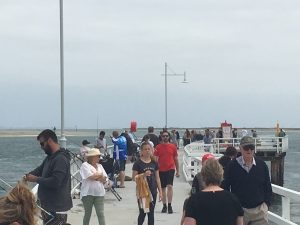